“Young Gymnast Overcomes all the Odds”

A young gymnast from Illinois who lost her leg to cancer is back to doing what she loves the most in the world, “gymnastics”. 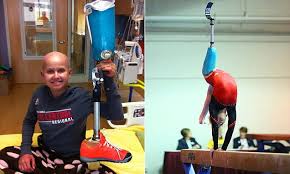 Kate Foster, 16, of Rockford may have a prosthetic limb but video of this courageous young athlete shows how she can still compete at a professional level.
The competition, broadcast on WGNTV, shows Kate doing impressive tricks on the beam before jumping onto the mat and giving her coaches a big hug.

Kate, who has been doing Cross Fit since she was just seven-years-old, was diagnosed with leukemia in 2011 and made a serious comeback.
According to St. Baldrick’s Foundation Kate had been feeling ill since Thanksgiving in 2010 and had constant fatigue along with what felt like a never ending flu,
‘We weren’t really sure what was going on, and I was still tired and bruising, and it was all just kind of downhill,’ Kate told The St.Baldrick’s Foundation.
Kate said she was both scared and relieved when she was told she had the potentially fatal disease.
‘I didn’t really know what that was. So I Googled it in the car, which you’re actually not supposed to do, because the internet always makes it seem worse than it is,’ Kate said.
‘But there was also a sort of relief in knowing what was wrong with me, because we’d spent all year trying to figure it out, and finally we had an answer.’
Kate was strong throughout her treatment, even when she learned she would have to have her leg amputated because of an infection before receiving a bone marrow transplant from her sister.
‘In the back of our minds, we knew we had to, in order to give the bone marrow transplant the best chance of succeeding,’ Kate said.
Just when she thought her troubles were over in 2012 she received some tragic news. ‘We went for a doctor’s visit and it was back. I had relapsed,’ Kate said.
Kate was put on a drug called plerixafor and was given a second bone marrow transplant and she’s been in great shape ever since. ‘I am feeling fantastic now,’ she said in summer 2014. Kate is now back to training five days a week and her future is looking very bright.
You can help other Athletes like Kate, by going to  Challenged Athletes Foundation  or St. Baldrick’s Foundation .

The St. Baldrick’s Foundation  is a volunteer-powered charity committed to funding the most promising research to find cures for childhood cancers and give survivors long, healthy lives.

Video Thanks to ZBC-ZenTa Channel