Double world champion Colin Lynch is set to take to the track in the Men’s Time Trial C2 for team Ireland later tis-morning at the #Paralympic games in Rio. 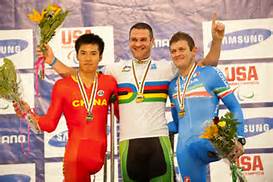 This adrenaline-fuelled sport which combines speed and tactics has been in the Paralympic programme since Atlanta 1996.

In Rio, there are 17 medal events, with men and women competing individually or in mixed teams
Lynch recently received funding of £8000 by launching an Indiegogo appeal for a vital piece of equipment for the Paralympics at Rio 2016 – a new leg.

Lynch, who was born in Singapore but has represented Ireland since 2010 and lived much of his life in Canada, had his leg amputated below the knee after suffering a foot injury in his teens, complicated by a tumour on his spinal cord.

“By the time the Games started, the equipment I used was already out of date and since then it has continued to decline.”

The 44-year-old, who won the C2 time trial at the 2011 UCI #ParacyclingRoad World Championships and still trains with the Macclesfield Wheelers, raised the much needed £8,000 for the new custom-made limb with the thanks and backing of 134 supporters through his Fundraising Page