The debate over female sports fans in Iran’s sport stadiums is long-running, contentious and divisive, dating back to the early days of the 1979 Islamic Revolution and re-ignited every time Iran hosts an international sporting events. Hardliners have been quick to remind authorities and the public that June 1th  falls on the second day of the holy month of Ramadan, a month of fasting, prayers, and mourning for martyred saints. Lifting the ban on women watching sports in stadiums would be anti-Islamic, hardliners claim, particularly during such a holy time.

Abdolhamid Ahmadi, Iran’s Deputy Minister of Sports and Youth Ministry, told IRNA (the Islamic Republic News Agency) on April 4, 2015, that the “Plan for Attendance of Families and Women in Sports Stadiums was approved by Iran’s National Security Council in March,” adding that the Plan would go into effect this year. 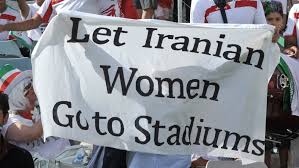 Fast forward to February 15, 2016 and we find an Iranian citizen journalist, who writes under a pseudonym to protect his identity, write the following article from a sporting ground inside Iran.

Volleyball is once again hitting the headlines for all the wrong reasons — because of Iran’s discrimination towards its female fans. As the Kish Island Open beach volleyball tournament got underway on February 15, female fans were once again turned away from stadiums.

A woman named Samira traveled with her sister and father from Tehran to the Persian Gulf island to attend the matches, but was turned away each time she arrived at the designated venue. When she challenged the security guard blocking her entry, he gave the following inexplicable response: “They said that women are free to enter — but they did not say that you are.”

The controversial guidelines having been causing a stir in and out of the country for over two years, attracting international media attention when authorities jailed British-Iranian Ghoncheh Ghavami in 2014 for protesting outside a stadium in Iran.

You can find the full article on the following link: http://en.iranwire.com/features/7092/?utm_source=twitter-hootsuite&utm_medium=social&utm_campaign=daily-new