The S4D Ireland website is steadily increasing traffic since it was launched in October 2013. Our Facebook, Twitter & Instagram pages have also seen steady growth in likes and views since they where set-up. Both will be updated with original papers and reports over the coming months.

We are delighted to inform you that our inaugural S4D Ireland School Poster Competition 2015 was a great success, and we will be holding it again this year (2016).   We would like to thank all the Teachers and Pupils for the time and effort they put in to produce the posters and most particularly for those they sent in. We were delighted with the calibre and diversity of entries and the interest from schools, both pupils and teachers, in what was the first poster competition for the IDSDP.

There are a couple of significant upcoming events in the world of ‘Sport for Development’;

The IDSDP 2016 takes place on Monday the 6th of April. This is the third year the UN designated day will take place and to mark it Sport 4 Development will be running our Primary School Poster Competition.

Secondly we have the 2016 Youth Olympic Games being held in Lillehammer Norway on the 12th – 21st Feb 2016. Information regarding the competitions, venues etc. is available on the YOG 2016 website. The games are held every four years in staggered summer and winter events consistent with the current Olympic Games format. The first summer version was held in Singapore from 14 to 26 August 2010 while the first winter version was held in Innsbruck, Austria from 13 to 22 January 2012. The age limitation of the athletes for the winter games is 14 to 18.

Thirdly we have  the upcoming IDSDP Primary Schools Art Competition.
We are inviting all Irish primary schools to participate in our 2nd annual Primary School Poster Competition which is being run in advance of and to help celebrate the 3rd International Day of Sport for Development and Peace (IDSDP) on the 6th of April, 2016. As 2016 is an Olympic year and the world’s attention again focuses on Brazil following last year’s World Cup our theme is – the Olympic spirit and sport. Info on this event can be found at http://sport4development.ie/irishprojects/sport4development-ireland-idsdp-primary-school-poster-competition-2016/ 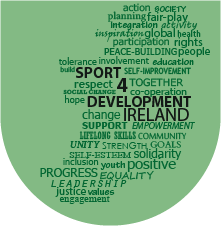