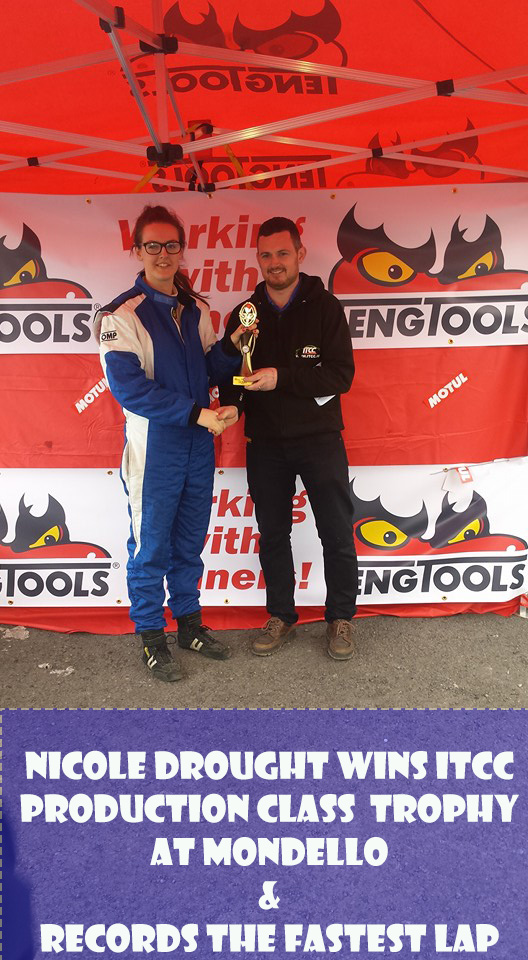 It’s that time of year again folks. The long awaited 2016 Irish Touring Car Championship, took place at Ireland’s International Motorsport Venue, Mondello Park‬  over the weekend. And once again Nicole Drought took to the track in style,  Coming second in race one and then taking her first ITCC win in race 2 on Sunday. Nicole recorded the fastest lap times on both races at the Mondello circuit, and was also awarded the ITCC Production Class – Trophy. She is now leading the championship by 10 points!

Nicole is one of only a hand full of female racing drivers in Ireland. Nicole was brought up around motorsport so gained an interest at an early age.  As soon as she was old enough, her dad Owain who was also a rally driver thought Nicole to drive, and i have to say he did a fantastic job. We are sure to see great things in Nicole’ future as a Race Driver. Congratulations Nicole from us all here at Sport 4 Development Ireland. Keep up that fantastic driving and the very best of luck in the remaining stages of  ITCC 2016.

Photo with thanks to Owain Drought

News thanks to Leo Nulty Promotions