Muhammad Ali Funeral Will Be Open To All 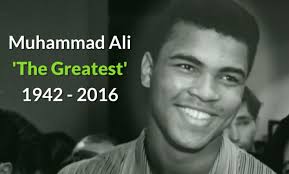 It has been announced that British boxer Lennox Lewis will carry Muhammad Ali’s coffin at his funeral this Friday.

Thousands are expected to turn out for the memorial in Ali’s hometown of Louisville, Kentucky.

On Friday the casket will be paraded through the streets of Louisville, so fans from around the world can say goodbye.

A spokesman for the Ali Family, Bob Gunnell said: “He wanted the memorial service to reflect his life and how he lived.
“He wanted everyone to be able to attend.

“He was the people’s champ and so he wanted that memorial service to reflect that.”

Ali’s died septic shock due to unspecified natural causes, though his health problems were complicated by a long battle with Parkinson’s disease.

“But I have been sad for a long time, just watching my father struggling with Parkinson’s disease. I have comfort in knowing that he’s not suffering anymore.”

Here in Ireland, Clare County Council has opened a Book of Condolence this morning for the boxing legend.

The three-time World Heavyweight Champion was named the first Honorary Freeman of Ennis when he visited the town back in 2009 to celebrate his ancestral links to Ireland.

Mayor of Ennis, Councillor Pat Daly, said’ Ali’s visit was a “fantastic occasion. 30,000 people came to Ennis, and the whole day was exciting”.

The people in the town were devastated to hear the news of Ali’s passing.