Top Irish sporting stars donned their black ties on Friday evening for an event that raised more than €100,000 for Special Olympics Ireland. 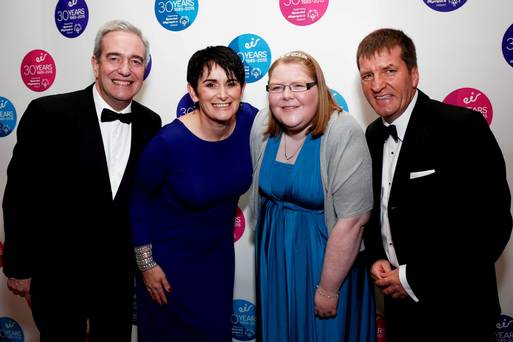 “I’ve been involved with Special Olympics Ireland for nearly seven years,” said Wood. “It is sport and support at its best, it brings joy to all, and it is something that Ireland can be proud to say that we are world class.”

Earlier this year, Special Olympics Ireland participated in the 2015 Special Olympics World Summer Games in Los Angeles, which involved 7,000 athletes with intellectual disabilities from around the world and featured competitions in aquatics, gymnastics, track and field, basketball, football and many other summer sports, and resulted in 82 medals for Team Ireland.

The funds raised will help the development of sports, training and competition programmes for more than 9,000 athletes all over Ireland.

Familiar faces at the ball also included Richard Moat, CEO of eir, Shelly Corkery, fashion director at Brown Thomas, and businessman Denis O’Brien, who is chairman of the Council of Patrons for Special Olympics Ireland.