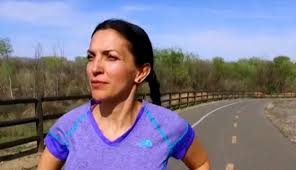 Born in n Mazatlan, Mexico, Bastidas trouble began at the age of 19 when she took a job at what she thought was a modelling career in Japan.

This turned out to be untrue and she was sold into slavery soon after she arrived in Japan.

Upon escaping several years later with the help of a convent, she took up running as a coping mechanism.

Within six months of taking up running Bastidas qualified for the Boston Marathon.

Soon after this Bastidas climbed the seven highest peaks on each continent, to raise money to find a cure for childhood genetic blindness, of which her 11 year old boy suffered from.

In 2013 Bastidas came up with the idea to set the world record by following a known route of human traffickers.

Bastidas 3,762 mile journey was filmed by her friend Brad Riley, who runs the anti-trafficking group, iEmpathize and will be released as a feature-length documentary called “Be Relentless.”

Bastidas was met by cheering crowds of trafficking survivors, who ran alongside her in the final miles to Washington, DC.

Bastidas said “It’s an incredibly long journey. I wish I could tell them it takes only one or two steps, but it is a commitment. I cannot undo what has been done,”

“[But] by living large, I’m empowering every single victim. Somebody who was once living in a nightmare is now living out her dreams. Because that’s what a world record is — it’s a dream.”