FIFA to inaugurate the ‪FIFA Diversity Award‬ this coming July 2016.

July will mark the 15th anniversary of the passing of the resolution against racism and discrimination which took place at the ‪‎FIFA‬ Congress in Buenos Aires in 2001. 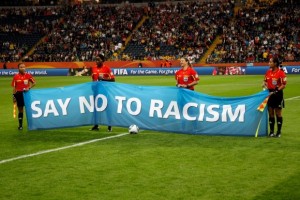 July will also mark the annual FIFA Diversity award, announced on the International Day For The Elimination of Racial Discrimination, which was a recommendation made by the ‪#FIFA Task Force‬ Against Racism and Discrimination back in 2013.

Fifa is to assemble an 11 strong jury, the “11 for Diversity”, comprising prominent figures from global football and international experts in diversity and anti-discrimination in sport. The 11 strong jury will combine all of their expertise in combating discrimination in all of its guises, whether based on ethnic, national or social origin, gender, disability, language, religion, political opinion or any other opinion, wealth, birth or any other status, sexual orientation or any other reason.

In this the first edition, we will see the selected nominees submitted to the jury members by FIFA’ administrations anti-discrimination experts in the Sustainability Department. In future editions, member associations and the general public will also be invited to suggest organizations and individuals to the jury.

Every year, this “‪‎11 for Diversity‬” team will then select three exceptional candidates from the highly varied landscape of projects and programmes implemented by organizations, group initiatives and individuals. The three finalists and ultimate winner of the FIFA Diversity Award will be presented to the public every July on behalf of FIFA by members of the “11 for Diversity” jury and a prominent figure from the world of football.

For More on this Story