Ireland at the 2016 Youth Olympic Games in Lillehammer

17 teen year old Gary Skinner from Terenure, Dublin, will be Ireland’s sole representative at the Winter Youth Olympic Games in Lillehammer, Norway which runs from tomorrow the 12th to the 21st February.

Gary is a member of the Ski Club of Ireland and the Leogang Ski Racing Club, Austria.

He has taken part in many other Competitions over the years such as the International Dry Slope Irish Open Ski Championships in the Ski Club of Ireland, where he took part in the Under 16 (U16) boys’ category, and won the category by a margin of 3.43 seconds over the combined two runs.

Gary was a member of the Irish team at the European Youth Olympic Winter Festival on January last and Lillehammer will be a big step up in the level of competition for him.

He is an experienced competitor who has raced in the New Zealand Australia Cup, the Australian National Championships and various Citizen/FIS races in Europe last year.

We here at Sport4Development Ireland wish Gary the very best of luck and we will be rooting for him all the way to the Finish Line.

71 nations will compete in this year’s Youth Olympic Games, and with 15 winter sport disciplines we are sure to have lots of amazing action to look forward too.

For more on Gary’s Story head to http://www.clongowes.eu/gary-skinner-skis-for-ireland/

Check out Gary’s skiing in the video below;

The Youth Winter Olympic Games are Regarded by many as a pinnacle of achievements,  and are held every four years, the most recent taking place in Vancouver, Canada in 2010 & Sochi, Russia 2014. The next Games will take place in  Lillehammer – Norway 12th – 21st Feb 2016.

The qualifying standard for the Winter Olympic Games is set by the International Olympic Committee, while selection of athletes is the prerogative of the Olympic Council of Ireland. Athletes work on a 4 year programme from one Olympic Games to next. 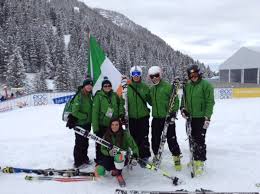