Irish Street league uses the power of sport to transform the lives of individuals from underprivileged, poorly educated, socially excluded and conflicting communities. We look to engage both male and female players, usually between the ages of 16 and 40 years, who are traditionally excluded from mainstream activities. Our primary target groups are:

Irish Homeless Street Leagues use the power of sport to transform the lives of individuals from underprivileged, poorly educated, socially excluded, and conflicted communities. The participants are men between the ages of 16 and 40 years. IHSL operate more than 10 leagues countrywide, with two in Dublin alone. They also run programmes in Wheatfiled prison and Mountjoy jail in Dublin. 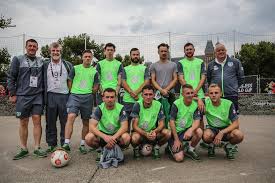 Team Ireland is managed by Homeless World Cup National Partner Irish Homeless Street Leagues. Their squad consist on eight players – selected from among 300 participants at the All-Ireland Final earlier this year – who are all excited to be representing their country and wearing the Irish jersey on a global stage.

The local Salvation Army in Amsterdam was a key partner of Stichting Life Goals, the local organizers of the 2015 tournament. Bulgaria fought hard and fair to win the Cup by beating Ireland on finals’ day by by a score of 6 – 4