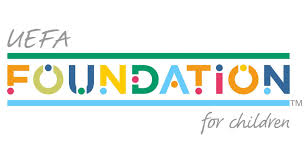 The UEFA Foundation for Children was established on the initiative of the UEFA President, Michel Platini, reflecting UEFA’s desire to play a more active role in society.

For years, the governing body of European football has been supporting initiatives and programmes that help children in difficult circumstances, working with numerous different partners to develop projects across Europe and beyond.

Keen to step up its activities and target them appropriately, UEFA decided to establish an independent foundation that uses sport to support humanitarian projects linked to children’s rights in areas such as health, education and integration.

On 26 March 2014, at the 38th Ordinary UEFA Congress in Astana, Michel Platini stressed UEFA’s desire to enable more people to benefit from football’s role in society.

With the support of the UEFA Executive Committee and the approval of UEFA’s member associations at that Congress, he declared:

This foundation will help us – help you – to preserve the magic of football and give hope to those children who need it most. This is a great project – a truly great project – and a cause that is particularly close to my heart.

The foundation aims to help children and safeguard their rights. Sport, and football in particular, can provide support in the areas of health and children’s education, as well as promoting access to sporting activity, facilitating children’s personal development and fostering the integration of minorities.

The foundation, which is a public body governed by Swiss law, was formally established and began operating the 24th of April 2015.

THE UEFA FOUNDATION FOR CHILDREN

The UEFA Foundation for Children, a charitable organisation governed by Swiss law, was officially created in 2015 with the signing of the foundation charter. Its assets are used to achieve its purpose, namely to help children in accordance with the United Nations Convention on the Rights of the Child.

The UEFA Foundation for Children is composed of a board of trustees, auditors and a secretariat.

THE BOARD OF TRUSTEE IS THE DECISION-MAKING BODY.

It is composed of 5 to 15 natural persons or representatives of legal entities, who, as a rule, serve the foundation on a voluntary basis. Trustees serve four-year terms and may be reappointed. One of them is elected chairman for the  same four-year term.

The role of the board is, among other things, to enact the regulations governing how the foundation is organised and managed, to define the foundation’s general strategy and to approve projects in keeping with the foundation’s purpose. It meets regularly.

The board is made up of the following trustees:

THE AUDITORS ARE APPOINTED BY BOARD OF TRUSTEES.

External and independent, they verify the foundation’s annual accounts and submit a detailed report to the board each year. They must also report any mismanagement to the federal supervisory board for foundations – a state authority whose role it is to ensure that foundations’ assets are used for their declared purpose.

THE SECRETARIAT IS RESPONSIBLE FOR FOUNDATION’S OPERATIONAL ACTIVITIES.

It takes decisions in accordance with the statutes and regulations governing the foundation and instructions from the board of trustees.