The ‪‎Effective Voice Award‬ recognises results achieved by organisations and initiatives to bring attention to a particular issue and enhance the sector it aims to have an impact on. The nomination is the third for ISCA and the NowWeMOVE campaign in six months, having been selected as a finalist in the PR News CSR Awards under the Corporate-Community Partnership category in January and shortlisted for a European Excellence Award at the end of last year.

The International Sport and Culture Association (ISCA) is a global platform open to organizations working within the field of sport for all, recreational sports and physical activity. Created in 1995, ISCA is today a global actor closely cooperating with its 180 member organisations, international NGOs, and public and private sector stakeholders. Its 40 million individual members from 74 countries represent a diverse group of people active within youth, sport and cultural activities. 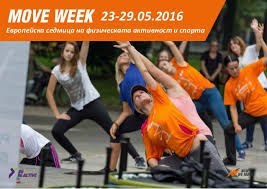 ‪‎MOVE Week‬ is an annual Europe-wide event held in May (23 – 29.05.2016) and has been an integral part of the NowWeMOVE campaign since 2012. With 1.8 million participants in 2015, MOVE Week has become the biggest annual week in Europe promoting the benefits of regular participation in sport and physical activity. MOVE Week is an open platform for anyone with an interest in getting people active to showcase their activity or event to their community. That person, group or organisation is known as a ‪MOVE Agent‬.

For more on the NowWeMove Campaign